Science Panel for the Amazon: Presentation of Initial Findings 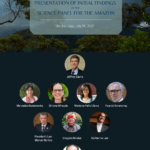 A Side Event at the High-Level Political Forum

The Amazon is the world’s largest rainforest and river system, vital to the planet’s climate stability and home to an irreplaceable wealth of biodiversity, much of which is still unknown. It provides critical ecosystem services to the eight sovereign countries and one overseas territory that encompass it, and also to the globe. The Amazon is home to 35 million people, including more than one million Indigenous peoples, with their own cultural identities, territorial management practices, and more than 300 different languages.

The rise in deforestation and fires in 2019 and 2020 marks a dramatic acceleration in the rate of deforestation. Deforestation, which affects nearly 17% of the total rainforest, threatens the survival of the entire ecosystem by endangering biodiversity, changing the water cycle, and provoking a negative feedback loop whereby degradation reduces the resilience of remaining forest. Many scientists warn the Amazon as a whole may be approaching a tipping point of irreversible collapse.

In response to these challenges and inspired by the Leticia Pact for the Amazon, a group of over 200 preeminent scientists from the region have untied to form the unprecedented Science Panel for the Amazon (SPA). The Panel is convened by the United Nations Sustainable Development Solutions Network (SDSN), and will issue a comprehensive, first-of-its-kind scientific assessment of the state of the Amazon, current trends, and recommendations for the long-term well-being of the ecosystem and its people. If implemented, the Panel’s recommendations will promote conservation as well as sustainable development of the region, with a vision of a standing forest, flowing rivers bioeconomy based on local and Indigenous knowledge, technology, and innovation.

This July the SPA will release their initial findings as well as a draft version of their full report for public consultation. The SDSN and the World Bank will co-host a high-level dialogue to present these initial findings and foster conversations between scientists and policymakers to advance sustainable development pathways in the Amazon.

The event will be discussion-focused, and feature interactions between the experts and policymakers. Registration is open online.

12:40 NYC Presentations from the Panel

13:30 NYC Discussion; Statements will be kept
strictly to 2 minutes to maximize the
number of speakers.