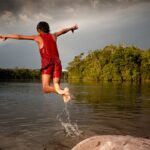 The Science Panel for the Amazon has released a statement on the occasion of the United Nations Summit on Biodiversity convened on September 30, 2020 by the UN General Assembly “in order to highlight the urgency of action at the highest levels in support of a post-2020 global biodiversity framework that contributes to the 2030 Agenda for Sustainable Development and places the global community on a path towards realizing the 2050 Vision for Biodiversity”

The statement emphasizes the urgent action needed to conserve the Amazon and, on the need, to invest and harness science, technology and innovation for sustainable development pathways in the region.

It also addresses the impact of COVID-19 in the Amazon and advocates for an Amazon Sustainable, Inclusive, Job Economic Recovery that respects Indigenous Peoples rights.

Urgent Action for the Amazon We Want

We, scientists of the Science Panel for the Amazon, appeal to the United Nations Summit on Biodiversity and to Heads of State, and citizens of the world to commit to saving the Amazon from the compounding effects and exacerbating threats of extractive industries, destructive deforestation, forest and riverine degradation, fires, and climate change.

We met on September 2019 at the United Nations, on the eve of the Climate Action Summit convened by the UN Secretary-General and issued a Scientific Framework to Save the Amazon. We emphasized that the Amazon is a place of immense natural and cultural wealth, values and diversity. It is the greatest repository of biodiversity in the world, holding more than 10% of all species of plants and animals on Earth. It is also home to 35 million people and cultural diversity, including more than one million Indigenous Peoples, with their own identities, territorial effective management practices, and at least 330 different languages.

We emphasized the significant and multiple environmental services that the Amazon provides to the sovereign Amazonian countries and to the world, including the critical role it plays in the global water, energy, and carbon cycles. The basin holds 20% of the planet’s non- frozen fresh water, the forest efficiently recycles water to the atmosphere, and the winds transport this moisture via rainfall to countries outside the basin.

The Amazon is also a critical buffer against climate change, absorbing between 13% and 20% of the 2.4 billion metric tons of carbon captured annually by the world’s forests. The forests store more than 100 billion metric tons of carbon, roughly a decade’s worth of global energy-related emissions. The Amazon rainforest and associated ecosystems are vital for the entire planet, and an irreplaceable heritage for all of humanity.

We warned that the Amazon is nearing a tipping point due to devastating trends that threaten the survival of both the forest and aquatic ecosystems which sustain it, and its inhabitants, especially Indigenous Peoples and local communities, whose rights must be respected if their knowledge and their role in conservation is to be sustained. Such threats are the result of the expansion of inefficient cattle ranching, low-productivity agriculture, the widespread use of toxic chemicals including mercury pollution, large infrastructure such as hydroelectric dams, illegal logging and mining, which cause deforestation and degradation of forest and aquatic ecosystems. Close to 70% of protected areas and Indigenous territories are threatened by roads, mining, oil and gas development, illegal invasions, hydroelectric dams, and deforestation.

Today, COVID-19 is exacerbating this situation. Illegal deforestation, mining, and other clandestine activities have increased since the beginning of the pandemic. This has unveiled long-standing structural and economic inequities, including access to basic services like clean water, sanitation, healthcare, education, transportation, electricity, and broadband. COVID-19 is also having a devastating impact on Indigenous Peoples in the Amazon. As of September 23, 2020, an estimated 238 indigenous communities of the Amazon basin have been affected by COVID-19, with over 61,782 people confirmed to be infected and 1,878 deaths, many of them elderly, numbers that, in all likelihood, significantly underestimate the true spread of the virus and its devastation of dozens of cultures through high mortality among Indigenous elders in the region who hold vast traditional knowledge. The plight of Amazonian urban dwellers is no less dire. Iquitos, Leticia and Manaus have extremely high rates of infection.

Bioeconomy[1] is one of the most important frontiers of scientific and technological innovation. The Amazon, with the world’s greatest biodiversity, has no doubt a significant bioeconomic potential by harnessing its biological and biomimetic assets, including those assets codified in the genomes of biodiversity.

Given that the Amazon is close to reach an irreversible tipping point of no return, the COVID-19 economic recovery plans cannot be based on expanded resource extraction. Rather, they should support the transition towards a more sustainable, and socially inclusive development of the Amazon, in both urban and rural settings. The resource-intensive export-oriented industrial development model adopted by most Amazonian countries for the past 50 years led to a massive destruction of the forest and to high inequity and poverty. It is essential to pursue a transition to an alternative economic model that no longer relies on deforestation and destructive extraction of commodities and raw materials, but, instead, could start with adding technological value to a sustainable production chain. Global cooperation should support local sustainable recovery plans from COVID-19.

We strongly recommend an economic recovery for the Amazon region with emphasis on green jobs and driven by investment in scaling up- recognition of the rights of Indigenous Peoples and local communities, in sustainable low-carbon green infrastructure, including health, education, and broadband. Special attention should be given to youth and children needs. We also call for the ecological restoration and fair use of degraded areas, and sustainable management of resources for a transition to a vibrant rights-based bioeconomy.

We acknowledge that the majority of Amazonian people are urban, and this trend towards urbanization is continuing. Development pathways in the Amazon so far have largely ignored the importance of achieving sustainable cities in the Amazon. That must change. Cities can grow even as their regional footprints stabilize.

We believe that an integrated cross-sectoral approach to land use, water, forests, fisheries, and infrastructure that secures and increases land under conservation, restores degraded lands, respects Indigenous Peoples, and invests in sustainable development pathways can save the Amazon.

We recognize the traditional knowledge of Indigenous Peoples, who have sustainably managed the standing forest and associated ecosystems for over 12,000 years. Close to 45% of the best conserved areas are Indigenous lands. And there is a growing appreciation of their knowledge as especially relevant for advancing a sustainable economy, as well as restoration of degraded areas.

The advanced economies have a deep responsibility to provide financing and support due to their role as primary consumers of products such as soybeans and meat that contribute to deforestation, and their historical cumulative greenhouse gases (GHG) emissions.

Movements across political, corporate, academic, and civil society spheres are surging to stop deforestation and to mobilize action for the sustainable development of the Amazon.

Given the urgency of COVID-19 crisis, and the continued forest destruction and fires, we urge the Biodiversity Summit to help the sovereign nations of the Amazon basin protect, what is also a heritage of global humanity. We insist especially on the protection and recognition of the Indigenous Peoples’ rights, who are the rightful first stewards of the Amazon. We must mobilize urgent medical care, telemedicine, protective equipment, fire prevention programs, and enhanced enforcement against illegal mining and logging and forest clearing.

Urgent local, national, and global action is needed, and we appeal to governments, businesses, financial institutions, civil society, academia, scientists, the media, faith-based communities and people of good will everywhere to join in a common effort to save the Amazon and invest in its long-term sustainable development.

[1] The European Commission defines the bioeconomy as “the production of renewable biological resources and the conversion of these resources and waste streams into value added products, such as food, feed, bio-based products and bioenergy. Its sectors and industries have strong innovation potential due to their use of a wide range of sciences, enabling and industrial technologies, along with local and tacit knowledge.” Source: “Innovating for Sustainable Growth – A Bioeconomy for Europe” (2012). In the ecological context of Amazonia, the understanding of Bioeconomy is strictly limited to the sustainable use of standing-forest and water-based biological resources (including free-flowing rivers) to ensure forest and ecosystem conservation.