To Avert a Tipping Point: Launch of the 2021 Amazon Assessment Report at COP26 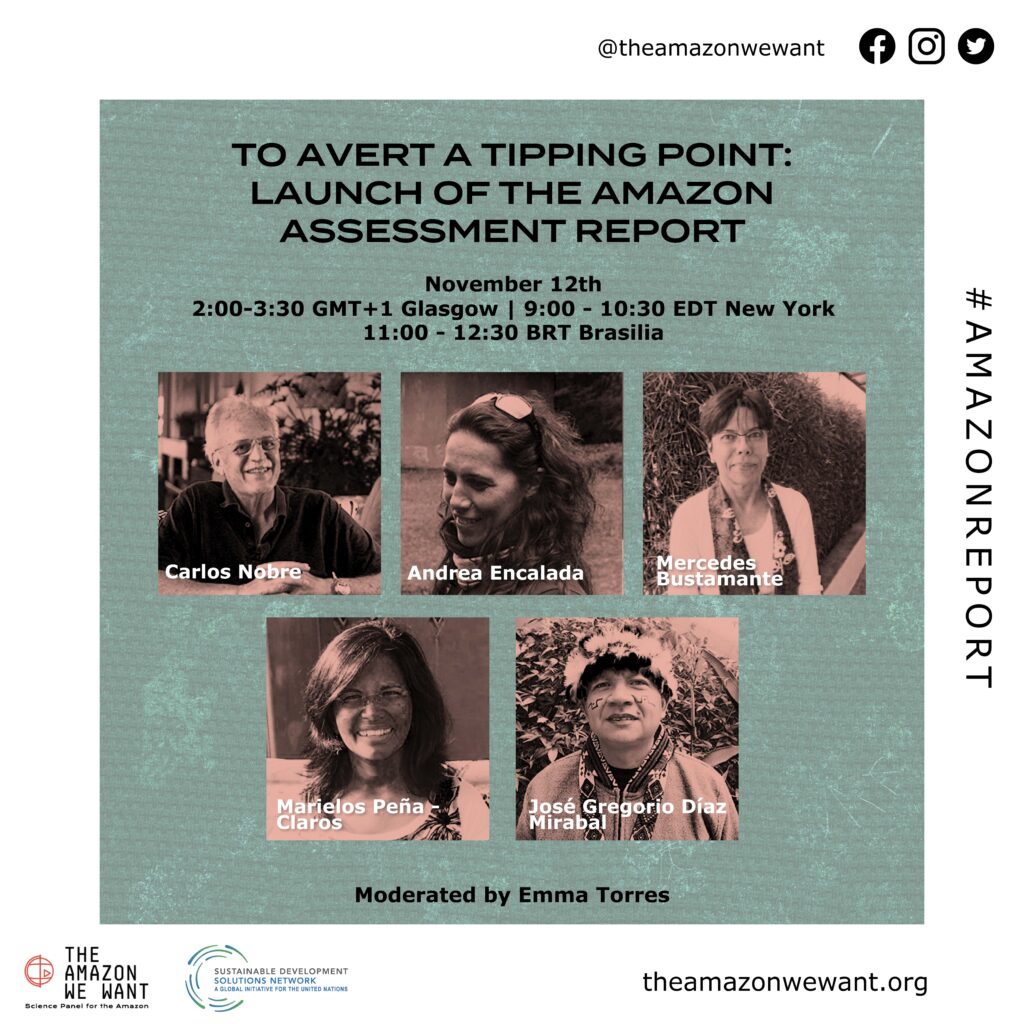 The event was moderated by Emma Torres and featured Carlos Nobre, Andrea Encalada, Mercedes Bustamante, Marielos Peña-Claros, and Gregorio Mirabal as speakers. During the event, Carlos Nobre spoke on the tipping points in the Amazonian basin, the importance of a moratorium on deforestation and the halting of wildfires, and emphasized that the solutions contained in the report must be implemented immediately. Andrea Encalada discussed connectivity between aquatic and terrestrial ecosystems across the entire Amazon Basin, along with solutions for a Living Amazon. Mercedes Bustamante discussed the multi-dimensional aspect of a Living Amazon and the importance of governance and finance for a just transformation.

To achieve these, we need global partnerships for resources and financial investments, implementation of multilateral Amazon coordination, and the halting of illegal activities. Peña-Claros ended with other recommendations, including investing in technology, science, and innovation; global action on climate change; and better governance of supply chains.

Gregorio Mirabal addressed the crowd saying, “We entered the SPA because we wanted to position ourselves alongside science, while reaffirming that the Amazon is our house. We have lived here for thousands of years and it is a living thing with a spirit, in 9 countries. To save the Amazon, we need to work in those 9 countries without discrimination. … I have seen that the authors of this report understood this; that we need to all work together and that we need to work with the governments. We have seen in this report that it is possible to build an economy that respects the trees and the spirit of the Amazon. It calls for a transformation and a new vision for the economy. This means working with you and making sure the resources promised at COP26 really arrive in the territories. This is why we ask you to please listen and let’s take action on what this report says, and implement the recommendations. This report ia a scientific and Indigenous effort and it is a voice of the Indigenous; not only the Amazon’s Indigenous peoples but all Amazonian peoples. Respect the work that has been done in this report and I ask that governments review it and that they call on the Indigenous peoples and the Science Panel for the Amazon to actually implement solutions because we don’t have a lot of time left.”

Several of the report’s authors offered comments from the floor. Ane Alencar spoke on the importance of emphasizing diversity in a myriad of ways; in ecological systems, social systems, economies, and cultures, saying this is what the Panel brings, and that “the way the report was built, it brings the best scientific evidence of how and why diversity is important.”

Jos Barlow spoke on the importance of degradation saying that carbon emissions from degradation could be even higher or as high as emissions from deforestation. Degradation is also causing biodiversity loss and possible extinction at almost the same rate as deforestation. Some of the solutions he shared were tackling illegal timber markets, improving pasture management, working closely with traditional peoples to improve slash and burn techniques, and setting restoration targets.

The State Secretary of Environment and Sustainability of Para (Brazil), Mauro O’de Almeida, also gave his thoughts on the importance of the report from a regional perspective and called for greater collaborations between Amazonian territories.

The event ended with a Q&A session addressing questions about the solutions in detail and the future of the Science Panel for the Amazon. The findings of the report were covered by The Guardian, O Globo, and Ojo Publico, among others.

View our July event where members of the Strategic Committee discussed the initial findings here.